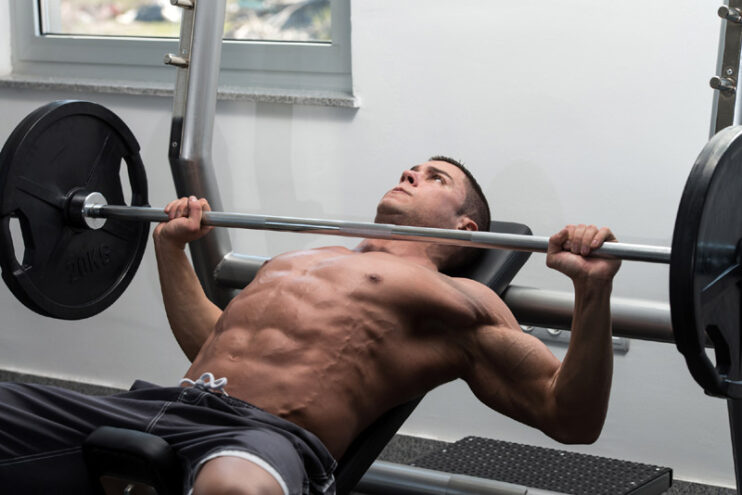 Is the most commonly asked question in the gym. It sort of determines whether you’re a “macho man” or a “little man”. Who wouldn’t want to bench 405 for reps? I know I would. What confuses guys is how to increase it.

I’ve talked to guys over the internet about increasing their bench… some have a good idea, others don’t. Some of you are guilty of either one or all of the seven benching sins. I’ll explain each one.

1. Maxing out every week

Many figure out that doing their max a lot will increase their bench…WRONG!! This only breaks and tears down the muscles which causes your bench to “drop”, which shouldn’t have happened in the first place. Your bench isn’t supposed to go down.

To others, they do their maximum so much, it causes injury. This shouldn’t happen either. Your maximum is a one-time deal or “once in a blue moon” thing. Once you do it once, you don’t need to do it again, because if you do it hinders your attempts to increase your bench.

2. Doing nothing but chest all the time

Doing your chest three times a week won’t make it stronger as well. Your chest can only take so much work and it has to recover regardless if your training three times a week. Your need to work the other muscles that work the bench and beyond. This also causes your bench to go down, which again SHOULDN’T happen.

3. Having a “bench competition” amongst friends

Now, I’m totally guilty for the next sin…having a bench competition amongst friends. In the gym, this happens. Somebody starts talking about benching more than their buddy and it starts a challenge. This is also a NO-NO. You don’t need to do this and plus it brings your ego down even further. Even worse, someone can get injured. You want to challenge someone, do it at a bench meet. That’s the perfect motivation for it. Don’t try to prove something to your friends, if they don’t believe you can’t bench 405 at 18 years of age (I’m exaggerating), then they don’t. Prove it to them when you hit 450!!

Read our article on the basic training tips you can use in the gym.

4. Benching directly to your chest

The next sin happens even to the best of us. When some of us warm up on the bench incorrectly. For example, some do too many reps with light weight causing them to fatigue early and it also causes them to not to achieve their maximal potential.

This generates frustration and causes the lifter to give up. This is also why someone’s bench goes down. Constant moving on the bench is also a sin. Its not a smooth motion and it can cause injury. Plus, if its causing you to do the “snake” motion, then its too much weight, and that’s also another sin. People are not pacing themselves.

The next sin is a new one for me. Most people teach this to the beginners which fools them. They start them out with a “close-grip” hand position on the bar, which is outside the spacing on the bar.

This is a bench press, and one of the fingers has to touch that spacing. The close-grip bench press is good for only working triceps, it doesn’t work the chest.

The final sin is what I call “snaking” on the bench. This is caused by doing too much weight and also caused by a huge ego.

“Snaking” on the bench makes the movement more difficult and it could also cause injury. You don’t want that. Drop the weight and the ego and go back to getting the perfect form.

Committing one of all of these sins will halt your progress and stop you from achieving the biggest bench possible. There is no way around it.

If you’re guilty of some or all of these sins, you may need to drop the ego and the weight and start from scratch. Once you master the form, your ready to increase your bench.