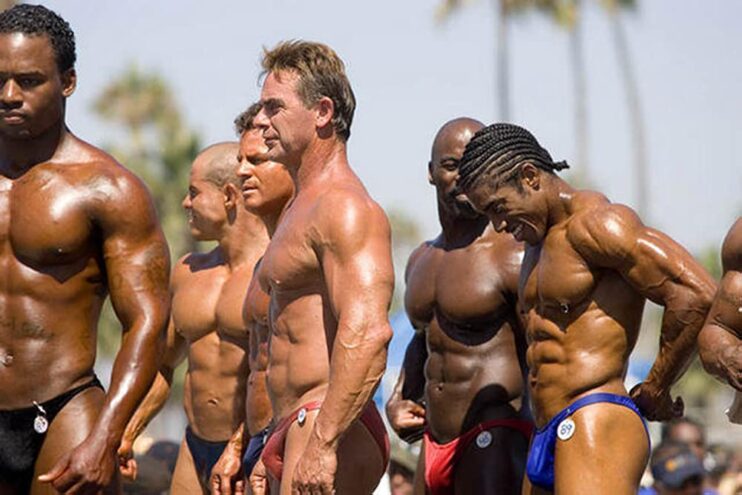 During these early years on the Beach, our band of eager athletes spent weekends and the long days of summer working out and honing our skills in the cool breezes of the Pacific.

Those I shared the sand within the mid-to-late-thirties were the true founders of Muscle Beach, the people who established its reputation and witnessed its growth as a unique contribution to physical fitness. It is their stories that I want to share with you in this book.

At Muscle Beach, Russ Saunders learned the techniques that landed him jobs in major films such as Singing in the Rain and The Three Musketeers, roles that made him one of the top stuntmen. And it was at Muscle Beach that I first got the idea that led to my inventing the Universal Gym Machine. (I didn’t call it the Zinkin because I was afraid no one would know who I was.)

It was there that Vic Tanny, the master promoter and gym entrepreneur, came up with the concept of a Mr. California contest and many other competitions that brought recognition and honor to those of us who won.

And it was there that women such as Relna Brewer and Pudgy Eville Stockton proved that attractive women could and possibly should lift weights ‹ including live, human, male weights, when they felt like it.

At Muscle Beach, we learned and shared information about nutrition, with less sophistication, but with the same passion that health-conscious people of all ages discuss healthful eating today.

The Beach we visited every weekend was a magnet for fitness leaders around the world. When John Grimek (who became the first and second American Athletic Union-sanctioned Mr. America in 1940 and 1941, as well as Mr. Universe in 1948) attended the 1936 Olympic games in Berlin, the Europeans bombarded him with questions about “that beach in Santa Monica.” The strength magazines were full of Muscle Beach photos.

It began as a place where a few friends could work out in the sand and grew to include a mismatched but amiable group of athletes, circus performers, wrestlers, college gymnasts, movie stunt people and just about anyone else who wanted to join. On weekends the crowd of spectators could easily top ten thousand, all lining the sidewalk to watch amazing stunts.

Jack LaLanne, a weekend visitor, was already a star to those of us who knew that this fitness-preaching, vegetarian kid wasn’t a nut. At Muscle Beach, Jack was in his element, and he didn’t have to worry about the many who disregarded his accomplishments.

Jack and I still laugh about how we met, and of course, we each tell a slightly different version of the story. I’d heard about Jack LaLanne for a long time. I knew that he’d started a modern-day health club in 1931 in Berkeley, that he could do a thousand pushups, and that he had quite a reputation as a wrestler. Jack had also heard about me, and we were both curious about each other.

Some people shake hands when they’re introduced, and some make small talk. Although Jack and I may have engaged in both of those polite gestures, I remember only what followed ‹ a furious wrestling match in the surf and on the sand.

Right away I knew I was dealing with someone who, like me, didn’t have the word “quit” in his vocabulary. He claims we were at it for ten minutes, but I know it had to be closer to fifteen or twenty. When Jack says there was no winner that day, he’s being kind.

I look today at a photograph taken of Jack, me and a few other fellows: from Stuntman Russ Saunders with the top, Gene Miller, Jack LaLanne, Moe Most, all of them balanced on a guy doing a full backbend ‹ me.

Although many of my sixth-grade classmates had predicted that I would become a strong man in the circus, this stunt took more than strength. It took us two years of practice to be able to hold that pyramid in position long enough for a photograph.

I usually worked in the second position on a pyramid, but I was the understander here, and I knew we had a small margin of error in the balancing process. We’d already been practicing with Moe standing on my backbend while holding another person.

Adding another body on top was the next natural step. It was the only time we ever did it. Almost fifty years later to the day, we saw a photograph of Russian acrobats doing it in an acrobatics magazine. When Paula Unger Boelsems visited Russia, she saw our photograph on the wall of a gymnasium. The pose has yet to be repeated in the United States.

I remember how, almost magically, as participants, we became as close as one body, each of us giving up any independent role we originally felt. When I look at that photograph today, I see not just our bodies, but our faces ‹ Gene, happy and secure on top; Jack, as always, determined to meet whatever challenges life handed him.

Beneath Jack stood Moe, a wonderful understander in many of the photographs you’ll see on these pages. In its upside-down state, my body was stretched to its limits and my face was all smiling. Even in this exaggerated pose, I loved every minute I spent at Muscle Beach. I couldn’t imagine anything I’d rather do.

All of us ‹ from top to bottom in that photo and in the rest of the photos I’ll share with you in this book ‹ were full of hope. Maybe that’s part of the reason Muscle Beach is such a source of interest for many today. That hope carried us farther than we could have guessed at the time.

Those who didn’t understand what we were doing called us “Muscleheads,” just as others with different abilities were called “Eggheads.” Although the term stung at the time, history has proven that we were on the right track, and that “muscle” isn’t a dirty word.

As you look at more than sixty years of photographs and read all the memories that go with them, you will realize that those times played a great part in the success of numerous fitness greats. More legends were shaped per square foot at Muscle Beach than anywhere else in the world.

The Beach certainly made a difference in my life. It taught me to think about fitness, to think about possibilities rather than impossibilities, and my own strengths that went beyond my muscles. In 1945, I won first place in my division at the AAU National Weightlifting Championship competition.

That was on a Saturday. The next day, in the same place, the same room, I placed second in the Mr. America contest that Clarence Ross won. It was quite a weekend. I never became that strong man in the circus, but I was once dubbed the Henry Ford of Fitness. It was a title that, like being named the first Mr. California, both embarrasses and pleases me. In 1960, the first of five patents was issued for my Universal Gym Machine.

Although I knew that the Universal was an essential product for schools and the military, I wasn’t sure how to get it there. Between 1960 and 1963, we sold just one per month. In 1964, we sold one per week, and in 1965, we sold one unit per hour. Universal was purchased in 1968 ‹ a multi-million-dollar sale ‹ and I continued as chief executive officer.

If I’m proud of anything, it’s that machine and the fact that there probably isn’t one professional athlete in the world who hasn’t worked out on a Universal at least once. If that machine turned me into the Henry Ford of Fitness, keep in mind that I learned to drive, metaphorically speaking, at Muscle Beach.

Muhammad Ali once said, “The man who views the world the same at fifty as he did at thirty has wasted twenty years of his life.” At seventy-six plus, I view that world with very different eyes today. Yet my goal here is to shut my eyes and take you back to the early days of the original Muscle Beach.

It was the birthplace of the fitness movement. Indeed, it’s where many hard bodies began. So many fitness greats got their start there. But we were kids, remember? And what kids care about, Muscle Beach delivered in spades. In a word ‹fun. Fun ‹ that’s the way it started.