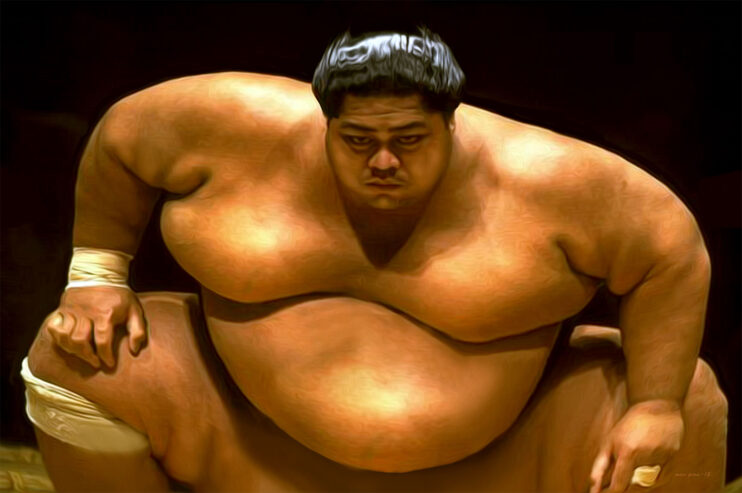 Yeah, they look strong, they look super powerful, and can blow away any skinny man by shoving him slightly off but are they healthy? You guessed right! Today, we are going to discuss whether these Sumo wrestlers are healthy or do they have to fight battles on both the outside and inside arenas. Let’s begin!

What do sumo wrestlers do and why can’t they look fitter?

Sumo wrestling is a special sort of Japanese wrestling where two participants have to partake in a head-to-head fight. See, no punches, no flying kicks! Using the strength of their bodies, one wrestler has to sweep the other wrestler out of the ring, to become the winner.

So, that’s exactly why Sumo wrestlers gain so much weight – so they can gain so much strength. Since there’s no restriction for maximum body weight, an average sumo wrestler may weigh easily 300-400 pounds or even more.

For the very same reason, these wrestlers try to consume at least 6000-7000 calories a day and do no hard workouts, other than doing some simple stretches to keep their bodies flexible. This strange lifestyle makes them strong, giant, and agile but also takes their efficiency in exchange. They can’t run or walk faster than an average person. Also, they can’t do too much strenuous work due to having tons of fat piles, tangling their muscles and joints.

We have read above how many calories they consume daily and how overweight they are but still, scientists believe that sumo wrestlers are healthy. The more interesting part is, according to science, sumo wrestlers can’t be even considered obese! Sounds pretty strange, right?

Well, According to health professionals, obesity is a condition that a person develops when he gains way too much visceral fat. If you don’t know, visceral fat is the one that accumulates in the lower belly and covers your vital organs including the pancreas, liver, kidneys, and heart. That’s the very reason why an obese person usually has to face heart or pulmonary diseases.

On the other hand, Sumo wrestlers gain most of their mass in the form of non-visceral fat. Numerous CT scans have confirmed that these vital organs are completely safe and are not tangled by the fat layers. Due to this reason, sumo wrestlers can’t be categorized as obese people.

Speaking of their cholesterol level then most of the cholesterol content is there in the form of unsaturated fat and runs into the blood, rather than accumulating in the veins. Due to this, they don’t have to suffer from any severe diseases like cardiovascular disorders or pulmonary diseases.

Wondering how they achieve such a perfect state of body, as per their career requirement? Well, it is because of their special diet and intense workout. Yes, sumo wrestlers do some intense sort of workout every morning which helps dissolve their visceral fat and cholesterol and convert it into strength and body mass. So if a sumo wrestler stops doing workouts or following his special routine, all of these obesity-related diseases will be activated, putting his health and life at huge risk.