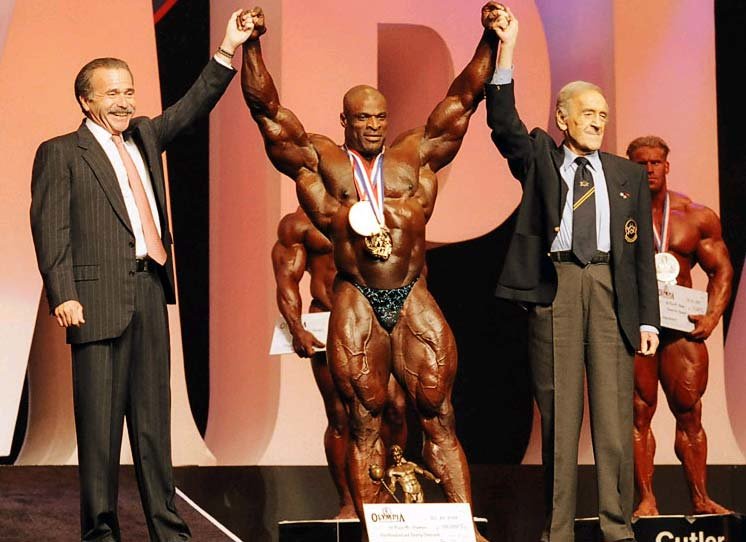 The 2004 edition of Joe Weider’s crowned jewel is slated for the weekend of October 30th. So far, the pre-event hype has centered mostly on the corporate side of the sport. In recent months, the headlines were dominated by the widely publicized American Media deal. A year ago, our attention was on “Ronnie-Jay-Gunter”. Those names were somehow replaced by the names “Pecker-DeMilia-Weider”. The new acquisition and a modified judging format have inspired some cautious optimism throughout the industry. The upcoming Olympia Weekend will represent the formal coming-out party for AMI’s arrival on the pro bodybuilding scene.

But for now, let’s leave the corporate bullshit behind us…its time to re-focus the spotlight BACK ON THE ATHLETES!

The Incumbent For 6 consecutive years, Big Ron has dominated professional bodybuilding. A year ago, there were those who felt Ronnie’s run would come to an end. As it turned out, the contest was over the minute Coleman walked on stage and presented a dominating package that featured the best rear development the sport has ever seen. This year, the reigning champ is flirting with history. A victory would equal Schwarzenegger’s career total of 7 Olympia titles…leaving Ronnie just one win shy of Haney’s record..

The #1 Contender At the 2001 Olympia, Jay presented arguably the most complete physique the sport has ever seen. His combination of size, symmetry, separation and conditioning was extraordinary. In fact, it was good enough to earn Jay a scoring advantage following the pre-judging rounds. In the end, Ronnie narrowly defeated Cutler…but the writing was on the wall. In last year’s event, Jay was a bit off the mark. Jay desperately needs to improve in the glutes, but make no mistake about it, Cutler CAN win this show. No longer motivated by financial necessity, Cutler is growing tired of hearing that Ronnie is unbeatable.

The #2 Contender Just when we were ready to label Cormier as “past his prime”, he arrived at the Arnold Classic this year in incredible shape. His off the field behavior is less than impressive. Cormier has pissed off his share of athletes (and former friends) with public jabs and accusations. But, as for Chris the Bodybuilder, his physique is flat-out superb. His shoulder to waist ratio is nearly perfect and his overall structure is a genetic masterpiece. Chris should be considered a contender…only if Ronnie & Jay should both stumble.

The #3 Contender If Jay and Ronnie are “apples” then Dexter is indeed the leader of the “oranges”. Dexter is the new ambassador of the sub-250 movement. Already with 5 pro titles under his belt, Dexter presented an extraordinary physique at last years Olympia. He was the hardest guy on stage. His proportions are fantastic and his ability to consistently dial it in is remarkable. Can Dexter win the Olympia? Not likely. Can he finish 2nd? Absolutely…in fact, he should have finished 2nd last year.

He will not be competing this year…amid rumors of his retirement.
In the remainder of the field, there are a handful of guys vying for a coveted spot among the Top 6.

Still the only man on the planet since 1998 to defeat Ronnie, Gunter was labeled by many as the heir-apparent following the 2002 Olympia. As quickly as Gunter’s stock climbed, it appears that it has fallen. The Golden Boy fell short of expectations last year, finishing 5th. Despite tremendous stage presence, Gunter’s structural flaws make it nearly impossible for him to contend for an Olympia title. Still an elite bodybuilder, Gunter is perhaps the victim of very unrealistic expectations.

It’s been a year to forget for Dennis the Menace. His legal problems have been well documented. Dennis presented his best Olympia physique last year, finishing a very solid 4th place. It’s hard to say how his legal troubles will influence the judges. Ranked 5th in the latest Pro Muscle Online IFBB Top 20, It’s been a full year since we last saw Dennis on stage. Historically a “hit or miss” bodybuilder, Dennis can finish anywhere from 5th to 9th in this lineup.

It’s been quite a year for Darrem. His added size has been recognized and rewarded by every judging panel that has seen him. Darrem raised his pro victory total to 4 after besting the fields in Toronto and Orlando earlier this year. Darrem will likely be among the hardest and most striated guys on stage. After finishing 7th at last year’s Olympia, Darrem is targeting a spot among the Top 6.

In the past year, we have witnessed two completely different versions of Lee Priest. First, we saw a soft, completely out of shape, longhaired Lee at the 2003 Olympia; Lee finished 15th (out of 16 athletes). Just 4 months later, on February 22nd, Lee stepped on stage at the Ironman looking more like the classic, famously compact specimen that can threaten any event he enters. So the question is…which Lee will show up this year?

After having to skip last year’s Olympia for health reasons, Ruhl bounced back and scored a Top 5 finish in Columbus. The 2002 N.O.C. champ is a walking, living, breathing cartoon character…the poster boy for freaky, thick muscle mass. The recent judging trend might not favor Markus and his massive proportions. Although, on the Olympia stage, size usually matters.

If they gave out a Sandow trophy for “Confidence & Swagger” Melvin would win every year. Breaking News! Pro Muscle Online has learned that Melvin will not be competing at this years Olympia.

Remains on the list of great bodybuilders who have yet to win a pro show. Needless to say, victory #1 will not happen at this show, however, there are very few who will argue against the aesthetic beauty of Haidar’s physique, highlighted by his full muscle bellies, great lines and incredible mid-section. Ahmad’s scores suffer from his relatively under-sized arms and lack of striated detail.

Last years Rookie of the Year, Troy finished 8th in his Olympia debut. After taking nearly a full year off, Troy has had ample time to re-tool. Although still a new player on the pro scene, it’s worth mentioning that he’s already approaching his 37th birthday. A very balanced bodybuilder, Troy’s proportions should be well received in this new era of “symmetry before size”.

Finishing Top 10 at last years Olympia, he reminded us that there is far more to Ernie than just a pair of oversized triceps. As he’s matured, his physique has achieved an improved level of balance and proportion. Another Top 10 finish is in the forecast for this “Dorian Yates Approved” spokesperson…if he can overcome injuries sustained during a recent motorcycle accident.

Winner of 3 IFBB events, Pavol has historically enjoyed his greatest success on non-US soil. Making his 4th career Olympia appearance, his previous best finish is 13th. Unfortunately for Pavol, this event is staged on the U.S. side of the pond.

In Part 2 of our Preview, we will take a look at the new-generation of Olympia bound stars, including Richard Jones, Jaroslav Horvath, Johnnie Jackson, Kris Dim, Craig Richardson, Gustavo Badell & Mustafa Mohammad. As a reminder, the October 9th GNC Show of Strength will provide a final qualifying opportunity for the ’04 Olympia. – Dan Solomon

Pro Muscle Online is now featuring expanded Olympia coverage…including a review of the new scoring format and insight from insiders throughout the industry.